Are Bitcoins the New Tulips? You Won’t Believe how They’re Related! 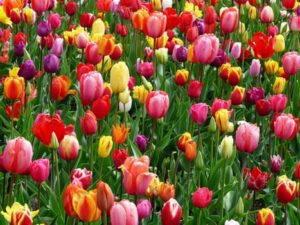 As far fetched as it sounds, tulips can teach us many lessons about the future of Bitcoin.

When future generations read about Bitcoin’s early history, will they refer to it as an equivalent of the 15th century “Tulipmania” bubble? The parallels between the Dutch Tulip Craze that we’ll talk about and Bitcoin are quite compelling. Although we do feel it’s too early to determine how the Bitcoin story will play out, looking into the past is always a great way to assess the future.

Only gardeners or florists pay much attention to tulips these days, but go back to Europe around 400 years ago and they were just as popular, if not more, than the latest iPhone.

Available primarily in modern day Netherlands, their popularity as a status symbol soon made its way into a very early form of the futures market. Contracts for tulips were traded back and forth just like we trade forex, oil, or gold today: a contracts were exchanged based on where prices were predicted to be headed.

News spread quickly of this new phenomenon and soon stories were told about people becoming massively wealthy overnight, simply by purchasing tulip contracts. Not just the elite, but everyday people began exchanging their possessions and even land for an opportunity to join the tulip craze, all while the price kept rising. Euphoria was indeed in the air as tulip investors imagined a world where everyone could free themselves from poverty with just a small share of tulips. This euphoria unfortunately signaled the peak of the market. Almost as quickly as prices for tulips had risen, investors soon found they were no longer able to sell their contracts or bulbs; prices had simply been pushed up too high. In a matter of weeks, the price for tulips fell sharply, leaving many an investor with an empty pocket.

What Can We Learn From Tulipmania?

There are many parallels between the tulip story and what we are seeing with Bitcoin. First, similar to tulips, Bitcoin has a limited supply that can be “harvested.” Secondly, in 15th century Europe, tulips were a complete phenomenon, the same way that a cryptocurrency like Bitcoin is unique for us today. Finally, Bitcoin, just like tulip contracts has a value that can be exchanged for goods or services.

A Major Difference Between Now and Then

There is one important difference though. Although the tulip contacts ended in a bubble, the value on the contract could still be exchanged for tulips, in essence, there was something physical backing the contact. In the case of Bitcoin though, there is nothing to physically back up this cyptocurrency.

Bitcoin is an example of pure supply and demand in action. It’s rapid rise in 2017 can be only attributed to speculation as nothing physical is behind Bitcoin. The idea of a cryptocurrency is very interesting, and for a variety of reasons it seems this form of currency is here to stay. What would be very interesting is if there were a form of Bitcoin that did carry more sense of security and assurance with it. No doubt it would at least make for a more certain investment than something based purely on faith.